A few days ago, a young Palestinian woman at the laundromat cafe mistakenly put a single walnut into our salad. I bit into the walnut and was immediately aware of the crunch of nut in my mouth. I spit out the mouthful and examined the contents. Anger and indignation arose in my body in waves, alternating with the severe discomfort and itchiness on my tongue and throat. How could this happen? I explicitly told this woman my nut allergy. Why wasn’t she more careful?

Joann asked what it would be like to take my mind off of the allergy for one minute. She encouraged me to drink a sip of lemon-mint juice, to have some water, to compare this juice with the one from Jericho. Choosing to focus on the pleasant and neutral sensations in my body, the sour juice puckering my lips, calmed my breathing and steadied my heart rate. I was operating again, not afraid of the allergy any longer, when the woman approached our table to see if we were doing okay.

I said, no. There was a nut in the salad, I just had an allergic reaction.

I could tell the woman felt badly, shaking, apologizing, asking if I was okay. The three of us were caught there in the uncomfortable silence, in her remorse and my anger. Joann turned to her and said, it’s okay. We all make mistakes. And just like that, the energy released and she was free to go.

I was angry that Joann had tried to soothe her. It’s not okay to make this mistake, I told Joann. She should feel badly, I could have died. I couldn’t even look at her: to do so would be to see her humanity and release my anger.

When Joann went to pay for lunch, I stood up and I forced myself to look at her behind the counter. Look at her, Melanie. A young woman, genuinely sorry, doing her best. She had made a mistake. To make amends, she hadn’t charged us for my lemon-mint drink. Suddenly I felt the severity of my anger and its impact on her. I smiled and thanked her, she apologized again. Please be more careful next time, I said.

During meditation, I explored the depth of my anger and my propensity to blame the girl for my sickness. I saw at the root of my anger was disappointment that my expectations for safety were not met.

Since I was young, my severe allergy has required heightened vigilance and care every time I go out to eat. Consuming any tree nut — especially walnuts, cashews, and pecans — risks anaphylaxis and death. At the very least, I will be sick for hours.

When I eat out, I place my trust in others, expecting that cooks and servers will treat my allergy with care and diligence, avoid cross-contamination, scrutinize ingredients in food prep… in other words, to be as careful as I would be in my own kitchen. It is an expectation that soothes my anxiety, and allows me to experiment with new cuisines.

It is a false expectation.

When my expectation is not met, I am forced to confront my own lack of control over my environment. Anger arises like fire in my chest and blame is quick to follow. Blame, arising in a state of anger and confusion, is my mind’s strategy for making sense of reality, for reconciling my own inability to control every outcome. If I have something or someone to blame, I can continue the self-delusion that I can control everything.

This delusion is a predicament of those with privilege, one that I must be aware of and tend to. Growing up in California with economic privilege, if I didn’t like something or someone didn’t perform to my standards, I could say something, complain, write a letter. Having money was a means of exerting power.

When I began traveling as a management consultant, I frequented the same hotels and restaurants for weeks on end, and carried a corporate credit card for all of my expenses. Having money allowed me to make demands of others, demands that would be met without question by those hired to serve me. I developed a sense of entitlement that things should be a certain way, that I should be given respect because of my ability, my employer, my education.

And yet what happens when reality falls short of my expectations? When a lovely young woman from a laundromat cafe drops one walnut by mistake? In these moments, I run into a wall: the reality of things as they are as unpredictable, impermanent, and out of my control. This is the fragility of privilege, manifesting as low resilience to change, being quick to anger and to blame.

In this present moment, I have the ease of an American passport. I have the good health that often accompanies youth, I have the economic freedom and mobility of being a software engineer. I have no obligation to student loans or an employer. These privileges have allowed me to live at Buddhist monasteries, to walk the Camino de Santiago, to swing by Palestine out of curiosity, and to choose to invest here. These choices reflect my own luck and privilege as much as they do my own hard work.

And yet, my students will still arrive late to class. Setting up my backend development environment will take two weeks instead of one day. My bus will crash into another car and delay my journey into Bethlehem. My friend will reschedule our meeting or cancel a program entirely. Israeli forces will enter my bus and ask to see documents. Gazans will launch rockets at Israeli towns. A candidate I dislike will win the election. More settlements will be built. Who knows what the future will bring? I am not in control of so many things. In the face of impermanence and lack of control, humility becomes the path of practice.

I must learn to forgive the woman at the laundromat cafe for dropping a walnut in my salad, just as I forgive my students for arriving late. In forgiving her, I practice with the knowledge that there is no outcome I can expect, no matter how much energy and effort I expend.

The world is unpredictable. While privilege may often shield me, I am not immune to its effects.

And on that note of privilege, why do I try to negotiate every taxi fare? Sure, it’s in my nature to desire a better price, a “fairer” price, one that reflects my status as a Bethlehem local rather than a tourist in town for a single day. I yearn to belong to this village, to be seen by locals here as a human being rather than an opportunity to take advantage. This yearning often manifests as negotiating in the taxicab.

Today, I did it again, asking for a ten shekel fare from my house in Bethlehem to Babszgag, the bus station for Jerusalem and Hebron. The driver didn’t protest, reducing the fare from fifteen to ten shekels before I even got into the car. He was quiet as he drove, pleasant, careful with the speed bumps. I questioned why I needed to bargain. It’s not like five shekels ($1–2) makes any difference to me, and perhaps it is meaningful to him, the equivalent of an extra bag of strawberries or three eggplants for the family. I have no clue.

For this taxi ride, at this time of day, fifteen shekels is a fine price and ten is a bargain.

A few weeks ago, Joann and I discussed that I feel entitled to bargain with the taxi drivers because of my economic power. The drivers have limited bargaining power: as a foreigner, I’m already paying more than the average local, and there is plenty of taxi supply. At any point, I can get out and find another car easily. I resisted this suggestion, stating that I want to be treated fairly, that I want to be seen as a local instead of a tourist.

But what is really fair, anyways? Is it “fair” that a taxi driver must work long hours at low prices to serve his family? Is it fair that he lives under the Israeli occupation and cannot charge prices equal to Jerusalem cabs? Fairness is relative, and a judgment of morality that one can pass when trying to justify a goal. So let’s talk about my bargaining.

It’s not necessary for me to bargain, it’s a strategy I use to belong in Bethlehem society. If I live there and know local prices, I can ask for the local price and thus feel like a local.

But if I am already being given a fine price, does bargaining further connection with my drivers? Can I see their circumstance, offer them goodwill, and still bargain, knowing that paying a higher price means nothing to me?

I’m beginning to think not. One of the responsibilities of privilege is generosity, to give of what I have to satisfy another person’s needs. My need for belonging is not truly going to be satisfied if I separate myself from my driver to bargain. Connection arises when I can truly be with another in their situation.

If I choose to take a private taxi, that could mean paying an extra 5 shekel per taxi ride. This is about $1 per ride, or $365 / year, if I want to be more generous with my taxi drivers for the entire year. I can choose how I allocate this extra money: it can go towards paying higher taxi fares, or supporting the work of local Palestinian artisans, or paying full price at a restaurant offering me a discount.

When I am in a private taxi, I can remember that my drivers are my collaborators too. It is true: without their taxicabs, time, and activity, I’d be walking everywhere.

Collaboration is a matter of degree. Mahd is irreplaceable for his ease with debugging, language ability, sense of calm and stability. I love working with him. Taxis are more replaceable because of their vast supply in Bethlehem, yet without them, I would not be on time to many of the meetings I have.

I can also remember that there are other options if I am truly interested in reducing my taxi fare and participating as a local. If I leave my house earlier and am flexible about route, I can take a shared taxi (service) for 3 shekels or the Palestinian bus for 2 shekels. I do not need to bargain with a taxi driver to meet my expectations of a lower fare for locals; I can take cheaper means of transit instead.

I want to take responsibility for my economic power and how I choose to utilize this power in Palestine. I want to treat my taxi drivers with respect and kindness, recognizing that paying a cheap “local” price may not serve them or me in the long-term. I don’t want to bargain in order to meet my need to belong.

If I take a private taxi, I will try to pay fifteen shekels per ride during the day. I will try to accept twenty shekels for longer rides without arguing. And I will give myself the space and extra time to take the public bus or local service when I’m looking for a cheaper ride.

Next time I’m on the road in Bethlehem, I’ll try it out. 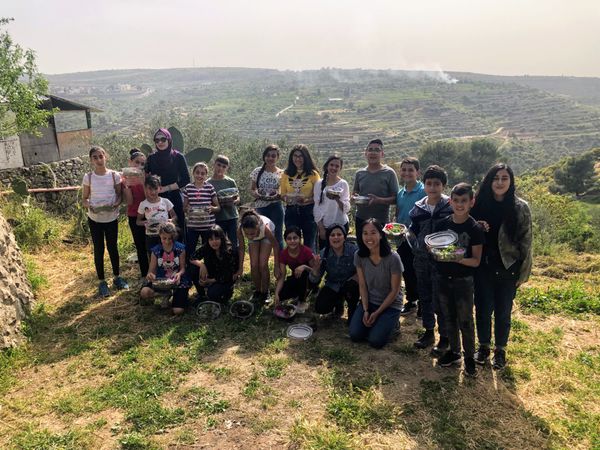 Stories from Bethlehem, Jericho, and Jerusalem

Peace and conflict in bus rides, meditation, and greeting cards