Mourning the death of an 18 year old volunteer medic killed by sniper fire in Dheisheh Camp.

Yesterday morning at 6am, Israeli troops invaded Dheisheh looking to arrest three Palestinian men. They burst into homes as they often do, sparking terror and fear in the homes of sleeping families. As the troops entered, Palestinian resisters started throwing stones. Israeli snipers started shooting from the rooftops. A few people were injured, and a team of Palestinian medics, clearly marked in bright orange vests, went in to tend to them. One of the volunteer medics was shot in the abdomen. He was rushed to the Beit Jala Governmental Hospital fifteen minutes from my house. He died on the operating table.

His name was Sajed Mazher. He was an 18 year old volunteer for the Palestinian Medical Relief Society. He was not throwing stones: he was providing medical care to Palestinians wounded in the confrontation with Israeli troops. And he died from sniper fire.

I can’t stop crying since hearing the news. I am not afraid for myself, because crimes don’t happen against foreigners here, and I don’t frequent the refugee camps at dawn when violence tends to happen. No, I am crying for humanity. For this 18 year old boy, serving his community as a medic, to be killed in the line of duty. For his community, that faces the terror of occupation in their homes multiple times a month. For this town of Bethlehem, and all of us in it, that live with the presence of guard towers, military presence, and random acts of violence and destruction. For this people of the West Bank, cut off from Al-Aqsa by a wall, living in fear, aware that wearing a hijab may single them out for interrogation and search. And I cry for the Israelis on the other side, and for their fear, scarred with the memories of the Second Intifada, the suicide bombers on the buses and in the streets. I am crying because this violence will beget more violence, because this is not an isolated incident but one that happens with terrible regularity.

I am crying because I do not yet see a path towards peace in this region. Lisa reminds me that I can take inspiration in “Thay conscience”. She is referring to the recognition of interbeing: I am the medic killed, and I am the soldier who shot the gun. I am the medic’s mother who has lost her son to violence. I am the soldier’s mother, that raised my son or daughter not knowing if they would come home from school each day. I am the commander that ordered the raid and the child that threw stones. I am Bibi, Abu Mazen, and leadership on both sides trying to protect myself, my family, and my own people.

I cannot stop looking. The Palestinian and Israeli medias operate in two separate worlds: the Israeli news does not even include a reference to the killing while the Palestinian news calls the Israeli army an “occupation force”. No wonder so much of the western world is unaware of what happens here: I can barely understand what is happening here and I’m living ten minutes away, working with teenagers who live in the camps.

Yesterday morning I walked from Beit Jala to the Nativity Church on my way to an afternoon of mindfulness in Hebron. When I passed the Beit Jala Governmental Hospital, just past Jumbo Supermarket and before the art store Ein Karem, a group of men was amassing. Others were streaming in on foot and by car. I did not yet understand then that this was the start of a procession of mourners. I was twenty minutes walking from my house, the church, Shepherd’s Field, and all the other tourist attractions.

Yesterday, the killing was not invisible to the tourists in Manger Square. Visitors learned the news because many tourist spots closed in mourning: even the famous hummus restaurant Afteem was empty.

I heard of the killing from Brother Phap Lai as I headed to my new home a few blocks from the square.

Had I heard of what happened in the refugee camp today, he asked.

Which one? I said. My mind was racing.

It’s the one in between here and Beit Jala, he said.

I had not yet heard. Sister Mai Lam, two lay friends, and I had just returned from the women’s mindfulness session in Hebron. I was brimming with ideas and purpose, and my stomach was satiated with a late lunch of eggplant salad, hummus, onions, and bread. I realized that I could start a weekly meditation group here in Bethlehem, and one of the lay friends offered to introduce me to the director of a center in Aida. When I heard the news from the brother, the energy from our session went dark for a moment. My heart sunk. My mind started thinking of my friends and their safety. How could this happen again, just one week after the shooting and death of a Palestinian man who stopped to help another man injured by a bullet? Why kill the people trying to help?

Eventually, I read the news from the Guardian, al-Jazeera, and other Palestinian news outlets. I saw the location was Dheisheh, the camp where I plan to facilitate resiliency trainings for girls and where in July I will host a series of coding workshops to provide young people with technical skills. It all seems rather silly now, in the face of such tragedy. I tell this to Lisa and she says, remember that the real resistance is normalcy.

I have visited Dheisheh many times now. One time, Lisa and I brought art supplies and glitter for Sajida’s family and we made sparkly picture frames of summer camp. Another day, I met Hazem and Tamara from Shoruq for the first time. A friendly man running the coffee shop next to the UN building invited me for tea in his hut. The hut fit just two or three chairs and one standing man, and we all huddled together exchanging customary Arabic greetings. Another day, Joann and I arrived for another meeting with Shoruq. It was raining. The man from the coffee shop again welcomed us into his little hut, and the man sitting next to me revealed that he had seen me before two weeks earlier. He was Tamara’s father in law and lived next door to the shop.

Many other memories touch me: visiting Hamdan and playing with his little boy, seeing the dangling electric cables and wondering when the electricity fires would break out. Looking out from Shoruq’s roof at the rooftops covered with huge black water tanks.

Now, Dheisheh is a community grieving. I am grieving too. I will return, my friends. I cannot turn away now.

If you’re interested, Al-Jazeera and the Guardian covered the situation. Their articles are linked below.

Peace and conflict in bus rides, meditation, and greeting cards 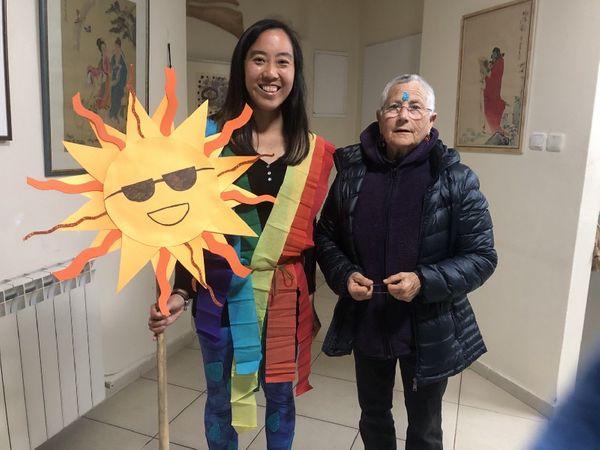