Aware of the suffering created by fanaticism and intolerance, we are determined not to be idolatrous about or bound to any doctrine, theory, or ideology, even Buddhist ones. We are committed to seeing the Buddhist teachings as guiding means that help us develop our understanding and compassion. They are not doctrines to fight, kill, or die for. We understand that fanaticism in its many forms is the result of perceiving things in a dualistic and discriminative manner. We will train ourselves to look at everything with openness and the insight of interbeing in order to transform dogmatism and violence in ourselves and in the world.

In this first training, I see Thay’s deterrence against using Buddhism as a means to initiate or fight war. Thay’s upbringing and coming of age in Vietnam during the Vietnam-American War is present in the roots of this first training: he makes it explicit that no war should be fought on behalf of Buddhism or any other doctrine.

Recently, I read Thay’s passage about mindfully washing the dishes. Washing dishes is a small, ordinary task in the day, and at first it may seem trivial to focus on. But, he says, if we cannot be fully present for washing the dishes, if we are looking forward only to our cup of tea afterwards, we will not be able to be present for our cup of tea either. And this is how I see this first training. We must practice with the small thoughts and actions of intolerance within ourselves so that when we must make the decision for peace or war, we have the training within us to make the right choice.

Recently, a friend in the leftist, anti-occupation collective I’m a part of in Israel was describing his trip to a settlement in the West Bank. He was very angry about his school organizing a trip to this settlement, which is illegal under international law. Provisioning land for these settlements often involves removing Palestinians from their land. He said, “I’m all for listening to many narratives, but I will not let this supersede my moral imperative to say what they are doing is wrong.” Out of this conviction, my friend refused to buy food from the settlement, packing his own lunch for the long day, and asked several difficult questions to the speakers while there.

I’ve thought a lot about his conviction and words since that conversation. How can I practice openness while also taking a stand for what I believe is right? Can I practice love and tolerance for a person’s humanness, the love of country and family that motivated them to settle in a settlement, without letting it justify their presence? Sometimes, I find it hard to understand Thay’s practice of non-judgment: how did he operate in the Vietnam-American War without obsessing about the details of peace? Which side would take what land? How would reparations be paid?

I get caught up in questions of “fairness” and “equity”. I get caught in the idea that the colonizers must be punished and make amends with the colonized. I easily fall into the view that there is a right and a wrong side, and those that don’t agree with my view do not see clearly, or are on the "wrong" side.

Anger arises when I think about Israeli settlements in the West Bank, and quickly this anger can lead to intolerance. I don’t want to have a meal with them, to listen to them speak, to support provisioning of water to their wells. No, it’s not fair, I don’t like it. In my mind, protest rages. I notice that alongside anger is a sense of helplessness and identification with the Palestinian cause.

On Friday, on my way to facilitate a meditation gathering at Holy Land Trust, I ran into a German friend on Arab bus 231. We were in Jerusalem near Beit Safafa when we began talking. This friend works on political campaigns to de-fund Regavim, an NGO that supports Israeli settlements in the West Bank and initiates legal action in favor of Palestinian home demolition. Regavim operates with funds from international organizations, including those in the United States. My friend works to explain the political actions of Regavim to its funders, with the end goal of removing funds from the organization and preventing its activities from continuing. I highlight this because it’s a viable alternative to helplessness, my friend acting on behalf of what he believes is right.

It’s certainly productive work against the slow but steady theft of Palestinian land. Is there openness there? I see the work as dismantling a pillar of support for the occupation, a critical and strategic effort. But maybe to a settler, the work looks like taking away their home, invalidating their right to be there. Two separate beliefs, each based on a people's yearning for home and land, with solutions that do not exist in harmony. Is there any compassion or love within me for the settler's perspective?

Yes, actually. I can be with the settler's fear of losing their home, just as I can be with the Palestinian fear of losing their home. In fact, just being with the fear (and recognizing their interdependence) may help these groups make their own decisions about what is right. How can both parties meet in goodwill and openness? It starts with letting go of the entities and ideas supporting the fact that you are right. Regavim or the Israeli government or the Jewish texts, for instance. Or the land deeds (or lack of them), the stories of grandparents working the land, the pain of losing a home. Recognizing that there may be many truths.

To be open is to be vulnerable, to let go of things defending your point of view. When I cling to ideas or entities, I often create two sides: me/my group and them/the other. I make judgments based on our my perceptions of who is right and who is wrong. And my judgments of right and wrong often lead to desire to cause harm, to punish the person in the wrong. My judgments and anger can form a dualistic narrative that prevents openness from arising.

Thay describes “perceiving things in a dualistic and discriminative manner” as giving rise to fanaticism. This fanaticism can lead to war, killing, or dying. Do I kill another when I suggest that his home is "illegal under international law"? Do I contribute to ongoing conflict?

What does Thay mean when he says the “Buddhist teachings are guiding means that help us develop our understanding and compassion. They are not doctrines to fight, kill, or die for”? Does he really mean this? What if the Israeli army is coming to demolish a Palestinian home? Do we as internationals and Israelis stand by and watch? Is peaceful mobilization only possible after the violence subsides? If the bulldozer moves towards a line of activists, do they move? Yes, I think Thay is saying that we shall not die for principles. But how then do we cultivate hope? Does violence win if we walk away? Is it enough to have gone at all?

My teacher Joann has encouraged me to work with the Mindfulness Trainings in light of the teachings on Right Diligence. The Heart of the Buddha’s Teaching describes four practices of Right Diligence:

I see my own tendency to judge others as “good” or “bad”, and on my side or against me. When I judge another person as not like me, or “bad”, I have an aversion to interacting or understanding their perspective.

When I think of speaking to a settler, the overwhelming question is: Don’t you know that settling in the West Bank is against international law and harming the Palestinians in Area C? And yet Israeli friends of mine have family in settlements.

A friend’s sister in the settlements expressed remorse at investing her family’s life savings in a home there, without truly understanding the implications. And now that she knows, she’s unsure what to do. How can she now leave her home and community? Apparently, she votes Meretz (a secular left-wing party in Israel).

By hearing this story, there’s another issue to look at: if settlers were open to moving, where would they go? It's not enough to say, go back to Israel. There must be paths developed for this to happen. Only out of compassion and understanding can this sort of possibility come forth.

So I can work with my own judgment of myself and others. When I’m having a slow day, feeling tired or lonely, I can work with my own acceptance of my tiredness or loneliness. I can celebrate the fact that I have time to myself. I can rest. I can read a book, or go for a walk, or just be lonely for a moment. Difficult feelings are okay.

Until I can accept my difficult feelings, the pain in my abdomen, the mosquito bites on my legs, I cannot truly accept the bigger things: the settlers on the hill, the police violence, the tweets of the American president.

When I do notice judgment arising, I can take care of it. So often my judgment and anger arises when I see someone using their power or privilege to take advantage of another person or community. In this judgment, I see my own fear of being taken advantage of, of not having power, of being alone and unloved without support. When this judgment arises, I can take care of its root, which is my own fear. I take the difficult feelings of others into my own body as a form of over-empathy, and this creates suffering within me.

I am most able to be open with myself and others when I am in a state of wellbeing. This means:

It comes down to issues of consistency: with meditation, sleep, exercise, eating, friends, and lazy days. A recipe that creates the possibility of openness.

Again, as a path to deepening openness, I can practice being with whatever is arising, even if the feeling is difficult, like anger or sorrow. Anger and sorrow exist in my body, and they each have something important to tell me. I can listen and be with them too.

I notice that my capacity for openness is stronger even after this exercise of thinking about the Israeli settlements in the West Bank. I can nourish the seeds of non-judging and openness by writing them down, being with them and taking a breath, and by being with others who strive for the same openness. Events like the Sulha gathering, which brings together Israelis, Palestinians, and internationals to listen to each other, or by going to Plum Village with a mixed delegation, or by staying open to visiting and being with people on either side of the line. Openness is a practice too, and if I stay in one bubble or another for too long, I will create my own echo chamber that does not truly include disparate voices.

You are invited into this house of love, Melanie. Come, wash your hands and sit down for a bowl of soup. It is cozy and warm inside, and the water is delightfully cool at the kitchen sink. The fixtures are metal, solid, glimmering. 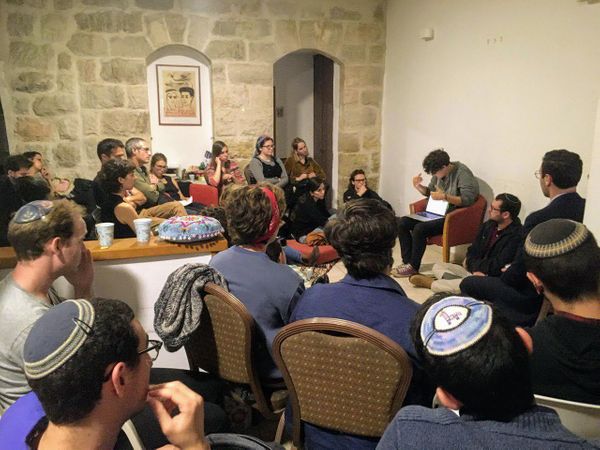 Saying goodbye to Leo, finding belonging and freedom in Jerusalem