On my first full day in London, I discovered that the visas of my Palestinian friends were delayed by two weeks, meaning that I would have to extend my surprise stay in London by twelve days. I panicked: I had no stable source of income, no friends in London to visit, and no reliable plans for France. What was I doing here? I touched doubt and fear, and considered heading home to volunteer for the elections after all.

That was Friday night. Before jumping onto another plane, I decided to take Saturday to rest.

Two sanghas in the Plum Village tradition would meet at the Westminster Quaker Meeting House near Trafalgar Square: I would attend both to meditate, calm down, and let my doubt settle.

By the end of Saturday, after two incredible sangha meetings (Heart of London and Wake Up London), I was dancing to live drums with Wake Up friends at Buddhafield, an eclectic gathering of spiritual British folks. I had housing offers from five or six different people for the eighteen days. And another few offered company, tea, and connections while I was in town.

It was magic, this Saturday. I basked in the warm glow of generosity of so many, including folks I had never met before. The rest of my time in London felt like I was floating downstream in a river: surrendering to the present, asking for help, resting rather than doing anything. Offering my own gifts: deep listening, tech skills, a homemade meal or thank you card when appropriate.

On Monday, Jude and her husband Matt hosted me in Walthamstow. One morning, we took refuge in yoga class; another evening, she introduced me to an amazing panel featuring African-British artists in a variety of mediums (journalism, radio, sculpture, painting/muraling). Jude is a filmmaker and storyteller, and we spent quiet afternoons discussing spirituality, right livelihood, and creativity.

On Wednesday, Charlotte gave me a comprehensive breakdown of the Palestinian tech industry over mushroom pasta in Peckham Rye. She introduced me to Founders and Coders, which is connected with Gaza Sky Geeks and has opened a coding school in the West Bank. She hosted me at her house near St. John’s Church. And a few days later, she offered me a part-time, remote software engineering job working with her startup, Carefreebreaks (which I accepted!).

On Thursday, Michael met me near Cutty Sark on his bike, and he and his wife Lynne offered me a beautiful bedroom in Greenwich. Later that week, Michael introduced me to his ninety-year-old father, who served in the British Navy during WWII and helped escort weapons and resources from the United States to Russia by sea. His father recently received a medal and dagger from Vladimir Putin, who described the acts of bravery by the British Navy as the only time Westerners have ever truly helped Russia.

The following week, Galiya, a woman I had met only once before at the Google I/O conference in 2015, offered me her own bedroom for two days. I visited Galiya and her lovely daughter, Maya, on the night of Halloween; we spent the evening talking Halloween costumes, friends, and reading a Thomas the Tank engine book.

Emily, a friend from California, met me on Thursday afternoon for tea and an adventure. We weaved through the streets, eventually landing at my favorite tea shop, London Review of Books (right next to my old flat near the British Museum). We stumbled into a Jewish bagel shop and celebrated Dia de los Muertos at a storytelling event in East London.

Flo and Alex, friends of Charlotte, hosted a retreat for social activists in Totnes, a town in the southern countryside. Flo gave me a discount, helped me find a ride from London, and the two of them held space for reflecting upon and nourishing our inner gifts and our work.

To Jude, Charlotte, Michael, Lynne, Galiya, Maya, Emily, Flo, and Alex: thank you for sharing your homes, lives, and joys with me. And thank you to the many other human beings who offered housing and/or community: Devon, Hilary, Chelsea, Kathy, and Helene.

I am truly grateful to have ended up in London without plans for three weeks. By touching despair in my body and the sensation of falling without end, I was able to experience the beauty of being caught and held by so many loving hands. I saw that I am never really alone, that there is beauty (not shame) in asking for help, that people have love and kindness in their hearts. To offer and to receive are gifts that we can give to each other.

Thank you for sharing your hearts with me, dear Londoners. I will carry this love and wonder with me for a long time. 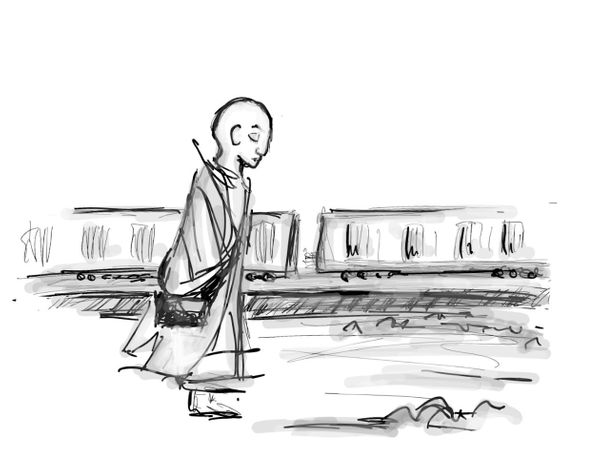 Written by Melanie Gin and Thy-Diep Ta, illustrations by Sheila Grießhaber “Brother, why do you look so sad?”, a voice called out to the man in brown robes.

melanie gin
Floating in the river of life